A delicious cake topped with cinnamon and almonds!  German Butter Cake or Butterkuchen is a classic treat from Germany that you can easily make at home.  Excellent for a snack, dessert, or even breakfast!

It might not be as ubiquitous as pretzels, but I have yet to see a bakery (at least in Frankfurt) that does not have German butter cake.

For a complete experience, start with my authentic German Potato Soup, locally known as ‘kartoffelsuppe,’ with some German Potato Pancakes (Kartoffelpuffer) on the side — then finish with a slice (or two) of this treat.

Although its literal translation is ‘butter cake,’ butterkuchen is more like bread, a yeasted bread to be exact — and it’s one of the most famous German treats for a coffee break.

Butterkuchen goes so well with coffee because it gives you that perfect balance of sugar and cinnamon in every bite.

And don’t forget the subtle crunch from the almonds!

IF YOU WANT MORE TRADITIONAL GERMAN DESSERTS, THEN YOU WILL LOVE THESE POSTS!

Start making butterkuchen by combining the yeast with half a cup of warm milk (photo 1).

Set it aside until it’s foamy and ready.

Mix with the paddle attachment.

Add the yeast mixture, remaining half cup milk, and egg — then mix (photo 2).

Add softened butter and switch to hook attachment; continue mixing until you get a smooth dough.

Form your butterkuchen dough into a ball and place it into an oiled bowl (photo 3).

Cover with a clean kitchen cloth and set aside until it doubles in size — typically for about ninety minutes.

Take it out of the bowl, and roll it into the baking tray’s size using a rolling pin.

Transfer it to the baking tray, then use a fork to prick it randomly (photo 4).

Cover with a kitchen towel and set aside for about thirty minutes.

Using a medium-sized bowl, combine the remaining sugar and butter with the cinnamon.  Mix evenly.

Uncover the dough and use your fingers to form dents on it (photo 5).

Spread the cinnamon-butter mixture on top — and use an angled spatula to spread it evenly.

Sprinkle sliced almonds on top of your butterkuchen (photo 6).

Place the tray in the middle of the oven for about twenty to twenty-five minutes.

Once cool enough to cut, slice your German butter cake into squares.

Serve, and sprinkle more almonds on top, if desired.

Can I use a different size of baking pan?

Absolutely. You can even use a round baking pan if you prefer.

But generally, butterkuchen is baked on a regular tray. That’s what makes it unique in a way – a no-fuss cake.

How do I serve this?

While it’s delicious as it is, butterkuchen is also excellent with whipped cream — especially if you’re serving it fresh from the oven.  Yum!

So, what do you think?  Give this butterkuchen recipe a try this weekend, and let me know! 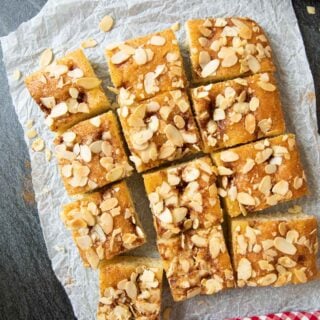 More Cakes From Around the World