Smokiness with a zing — that’s what you should expect in a serving of Turkish-Style Roasted Eggplant Soup.  Creamy and slightly lemony, it’s excellent as an appetizer or as a light meal on its own!

I had this soup on my first visit to Istanbul, back when I was still clueless about what Turkish cuisine and flavors are all about.

Coming back to Stockholm, the only roasted eggplant soup recipe that I can find was from New York Times.

I tried that, but there was still something missing.

Finally, after tinkering with it a bit — this is as close as I can get to that Istanbul dish without asking the chef.

I hope you like it as much as I do!

I generally use plain Greek yogurt.

The sumac (in the za’atar) gives this dish its ‘zingy’ flavor, further elevated by the lemon juice.

Use a knife to make cuts in each eggplant.

Drizzle with about one and a half tablespoon of olive oil (photo 1).

Place the eggplants in the oven for thirty minutes, then set aside to cool.

Once they’re cool enough, cut each roasted eggplant into half and scoop (or scrape) the insides for the soup.

Cook until the onion becomes soft.

Cover the pan with a lid and bring to a boil.

Lower the heat, then let it simmer for about ten minutes.

Mix to combine the yogurt with the rest of the ingredients.

Use an immersion blender to puree the soup (photo 6).

Add lemon juice, mix and bring to a slow boil.

Serve with a drizzle of olive oil and garnish with some za’atar.

It helps in cooking them evenly.

Just make sure you give the soup enough time to cool before transferring in the stand blender.

I do that sometimes, but I generally leave it as it is.

How do I serve this?


Always serve some form of bread with it.

A crusty chunk of bread or some toasted baguette — YUM!

So give this Turkish-Style roasted eggplant soup a try this weekend and let me know!

If you want to try a traditional Turkish recipe? Then head straight to Turkish Celeriac Soup!

OR IF YOU ARE LOOKING FOR MORE EGGPLANT RECIPES, THEN YOU WILL LIKE THESE POSTS! 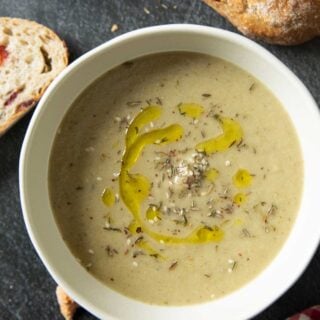