Looking for an easy salad recipe?  Panzanella (Bread and Tomato Salad) will not disappoint! A quintessential Italian dish – so simple, so easy to prepare and so delicious! 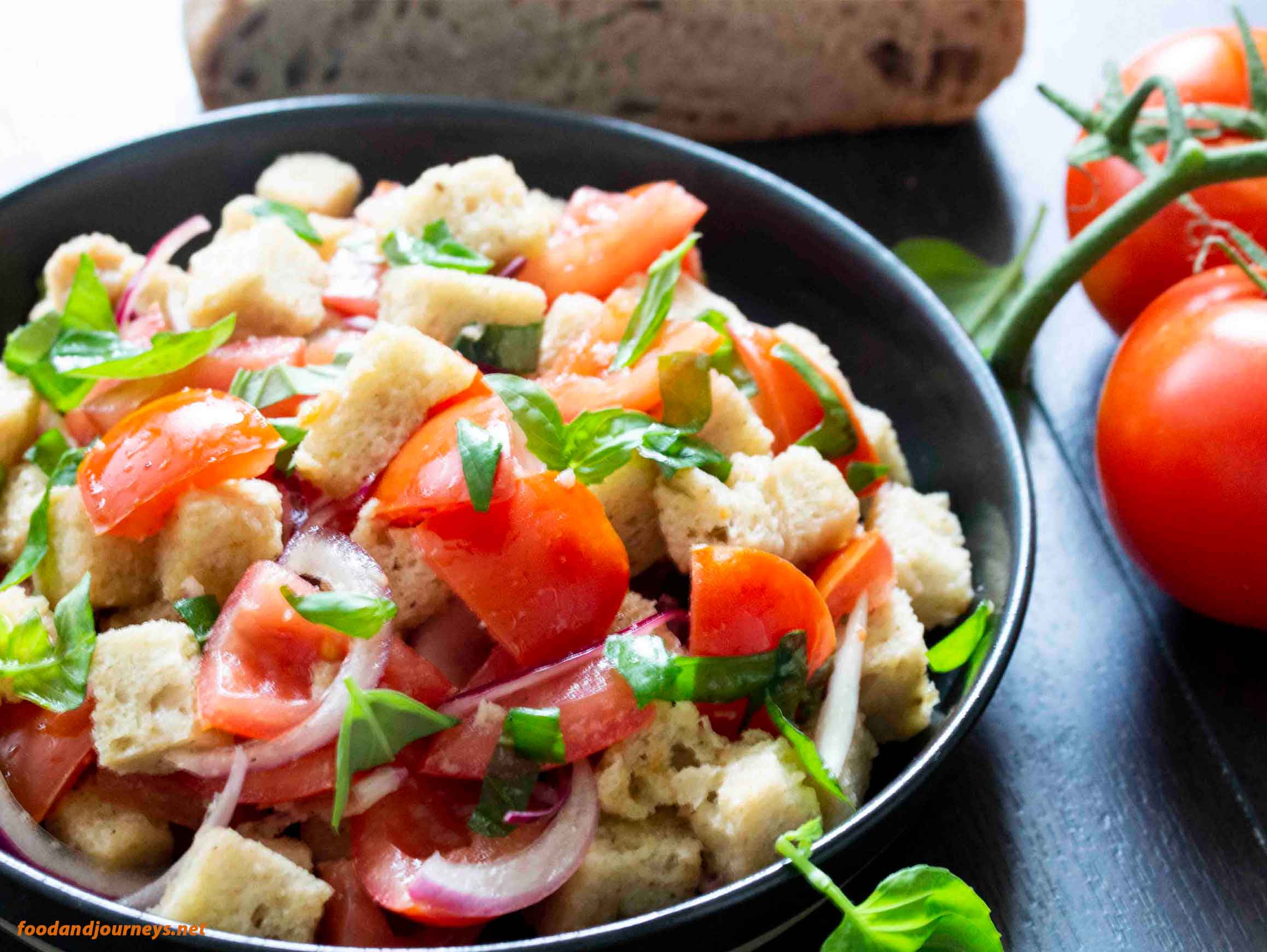 Almost every region in Italy have their own version of ‘Panzanella’, otherwise known as ‘Bread and Tomato Salad’.  Some regions add olives, cucumber, lettuce, even boiled eggs.

This recipe, however, is based on the Tuscan Panzanella that I love.  When you get the chance to visit the region of Tuscany during summer, there is no escaping this salad. 🙂

HOW TO MAKE PANZANELLA (BREAD AND TOMATO SALAD) WHAT IS THE BEST TYPE OF BREAD TO USE FOR PANZANELLA?

I have tried this with various kinds of bread, but I always go back to either the white Italian bread or the Tuscan bread (the one without salt).

I have always thought sourdough makes everything better, but it did not work for Panzanella. (At least for me 🙂 ). I have seen some people use croutons instead of bread, but again, that is not how I have seen it in Tuscany.

When I tried using croutons at home, I did not like it that much.  I like plain bread more because it absorbs the vinegar and oil better, hence complementing the basil, tomatoes and onions in every bite.

If you want crunch, then do not remove the crust on the bread.  Depending on my mood, I make it with or without the crust.

One thing that I ALWAYS do is to remove the core and the seeds of the tomatoes.  This lessens the liquid in the salad, without compromising the taste. 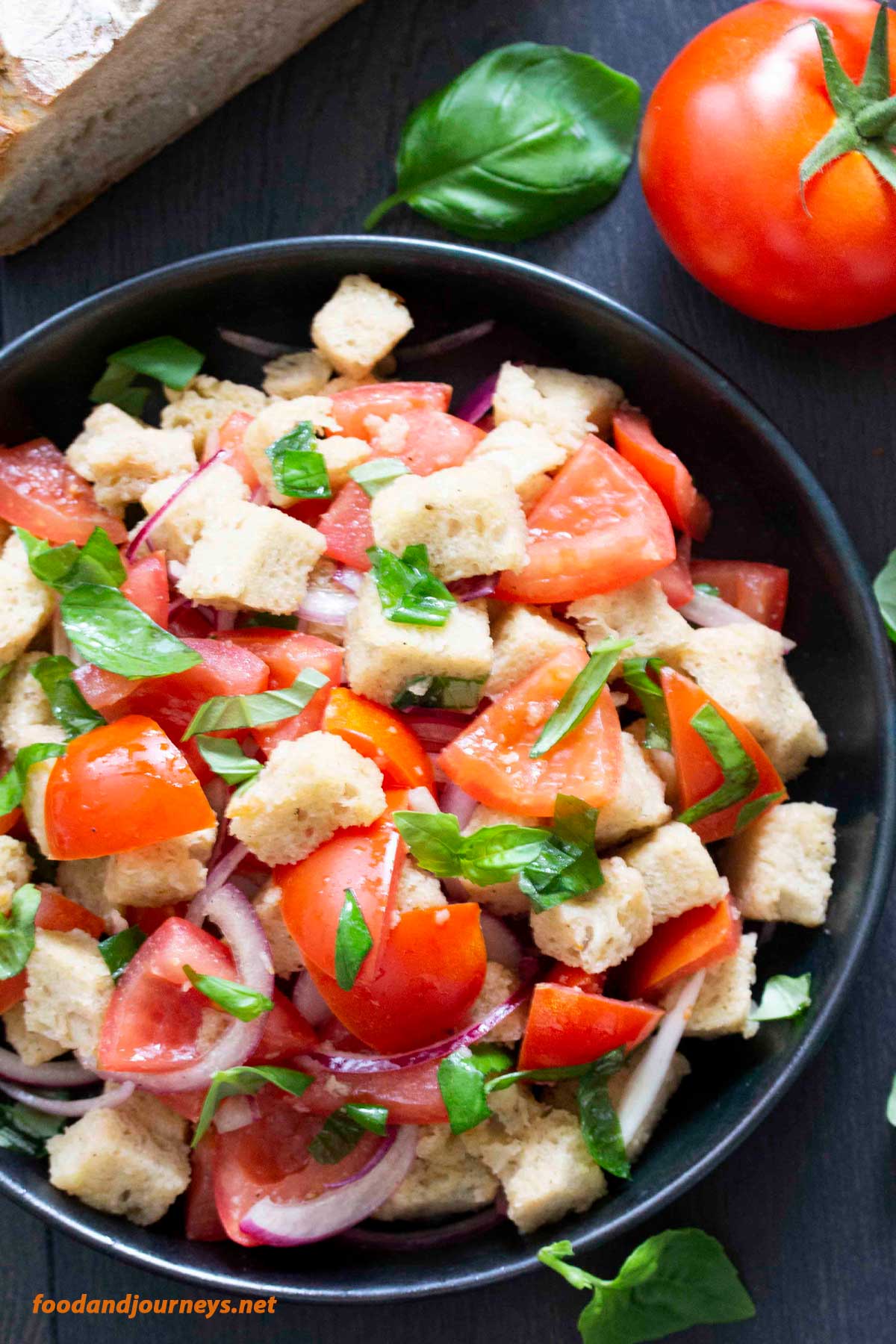 IS PANZANELLA JUST A SUMMER SALAD?

Personally, I make this in Stockholm the whole year round, not just in the summer.  The tricky part with this is the type of tomatoes to use.

During winter, I can only use cherry tomatoes, because the big ones are not that good.

Admittedly, it’s annoying removing the seeds in cherry tomatoes, because of their size – but as my mother-in-law says, ‘What can you do…?’ 😀

IF YOU WANT TO GET MORE SALAD IDEAS, CHECK OUT MY SALAD COLLECTION!

For other appetizers or side dishes that are great for summer, check out these posts:

*Btw, this recipe was originally posted last year (April/2017).  I wanted to add the video and I reckon, might as well change the images and republish.  No change was done in the original recipe though. 🙂

VIDEO ON HOW TO MAKE PANZANELLA 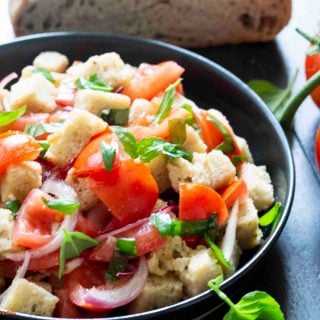