There are many ways to cook bratwurst, the famous German sausage. So, take your pick from this list and start serving properly cooked, flavorful and delicious bratwurst — even without an outdoor grill!

As you probably know, almost every region and state in Germany has its way of making bratwurst.

Hence, there are tons of bratwurst varieties, mostly made of pork, but some are made of beef or veal.

To show how to cook bratwurst, I am using my favorite variety — the Nürnberger Rostbratwurst.

They’re characteristically small and thin from the city of Nuremberg and have Protected Geographical Indications (PGI) under EU law.

These brats showcase why this German food is so popular — pork-based sausage seasoned with herbs, in this case, marjoram.

So, let’s get started!

IF YOU WANT MORE CLASSIC GERMAN RECIPES, THEN YOU WILL LIKE THESE POSTS!

The best way to cook bratwurst

It all depends on the amount of time you have and how you intend to serve the cooked bratwurst.

I prefer to cook them on the stove, but if I cannot watch them closely the entire time, cooking the brats in the oven is the best option.

If you intend to make bratwurst a regular part of your weekly meals, having any of these two equipment would come in handy:

Both are excellent in preparing bratwurst in the oven or on the stove.

Cooking bratwurst on the stove

Simmering the brats for a few minutes before frying or grilling on the stove will ensure that they’re properly cooked.

Some refer to it as boiling, but it’s actually simmering to avoid bursting the skin of the fresh bratwurst.

If you are preparing small brats like the ones I have shown, follow the same steps, but simmer them for no more than seven minutes.

Frying the bratwurst in a skillet or pan will finish their cooking and give them a nice brown color.

A couple of things to remember on how to cook bratwurst in a skillet:

You can use either a skillet or Dutch oven when cooking bratwurst on the stove.

In a grilling pan

Things to keep in mind when grilling bratwurst on the stovetop:

Cooking bratwurst in the oven

Cooking brats in the oven is a great option when you have other things happening simultaneously — say, preparing your mashed potatoes. 🙂

I see a lot of people placing the brats directly in the oven uncovered.

I prefer not to do that because I think it tends to brown the outside too much.  So here is what I do instead:

Refer to the recipe of oven-baked brats with onions below as a reference.

Prepare a bratwurst sandwich similar to the famous street food in Nuremberg called ‘Drei im Weggla,’ which translates to ‘Three in a Roll.’

Just slice a not-so-soft roll in half and place three fried or grilled bratwurst in there.

Finish it with a generous smothering of mustard, or you can even add some sauerkraut if you want.

A bratwurst sandwich is excellent as a snack or as a light meal on its own.

I remember this exact combination as my first meal in a Sachsenhausen beer garden when we were living in Frankfurt.

It’s a typical plate of German food in every beer garden — bratwurst and sauerkraut, with that dollop of mustard on the side.

Sometimes served with roasted or fried potatoes instead of mashed potatoes, and if you get lucky, some apple puree in there as well.  Yum!

While not a traditional German dish, this is indeed a wonderful dish that’s so easy to prepare and packed with flavors.

If you are worried that you will burn the onions, don’t be.  I have never had that experience.

Just make sure you have enough olive oil to coat the onions.

So if you’re adding more onions than what I indicated in the recipe, make sure you add a bit more oil as well.

Oh, and baked bratwurst and onions are also excellent for making a sandwich!

How long to boil the brats?

As soon as the water boils, turn the heat down and simmer the brats for about 10 minutes, less if they are smaller bratwursts.

Do not continue boiling and keeping the heat on high.  It might cause the skin of the brats to burst.

Can I cook brats without beer?

As shown above, you can use water, stock, or broth for simmering the bratwursts on the stove.

So tell me, which is your preferred way of preparing fresh bratwurst? 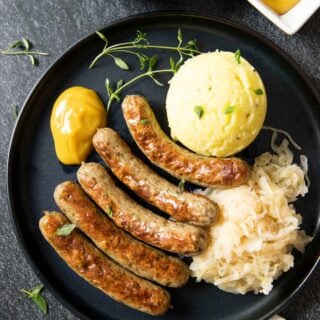 How to Cook Bratwurst (+ Baked Bratwurst and Onions Recipe)

For cooking bratwurst on the stove:

For baked bratwurst in the oven:

How to cook bratwurst on the stove:

How to cook bratwurst in the oven: