Locally known as ‘Patatas a la Riojana,’ Spanish Chorizo and Potato Stew is a dish you should regularly make during these colder months.  Easy to prepare, and complex flavor in every bite — even the potatoes taste like chorizo.  Delicious!

Whenever I’m in the mood for a quick Spanish-themed full meal, my go-to plan is — fried padrón peppers for the appetizer, patatas a la Riojana for the main, and magdalenas for dessert.

You can check the other two dishes later, but for now, we focus on the main dish:  Patatas a la Riojana.

So, what is patatas Riojana?

It’s a dish that originated from La Rioja, a province in Northern Spain — hence ’a la Riojana.’

A stew that uses Spanish chorizo as its base and adds more smoked paprika to give it more depth.

Like Spanish beef stew, it’s not a complete dish without potatoes; in this case, the potatoes absorb all the chorizo and paprika flavors as well.  Yum!

Spanish chorizo and potato stew can also be served as the first dish.

Either way, you will always get a delicious, flavor-packed serving on every plate. 🙂

IF YOU WANT MORE CLASSIC SPANISH RECIPES, YOU WILL LIKE THESE POSTS!

You can use the semi-cured (semi-dry) or cured ones; both will work because the sauce will keep them softer.

Start preparing your chorizo and potatoes dish by placing a Dutch oven or a medium to large-sized pan over medium-low heat.

Cook until the onions turn soft.

By this time, you’ll see the colors and the flavors from the chorizo coming out (photo 3).

Mix and cook for three to four minutes.

Pour the stock, just enough to cover the chorizo and potatoes (photo 5).

Season with salt and smoked paprika.

Mix everything — the liquid should turn into the color of the paprika (photo 6).

Cover with a lid and simmer for thirty to thirty-five minutes or when the potatoes become tender.

Transfer your Spanish chorizo and potato stew into serving plates.

Serve with some parsley as a garnish, if desired — enjoy!

Remember that it’s a stew, not a soup.

As you can see, I skipped that part and decided just to chop the potatoes with a kitchen knife.  Feel free to give it a try, but please be careful. 🙂

You might need to add less salt or just a tiny amount of smoked paprika because the chorizo has already provided enough smokiness for your taste.

What do I serve with this?

Toasted bread, baguette, country bread, sourdough?  Whatever your favorite bread is.  The important thing is that they will sop up a LOT of the sauce — and for cleaning your plate. 😉

Looks absolutely mouth-watering, right?  So try this chorizo and potatoes recipe this weekend, and let me know! 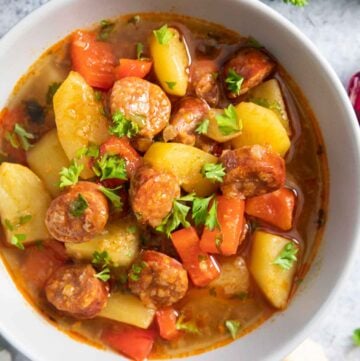